Wow! If that isn’t clickbait then I don’t know what is!

So I feel like to accurately tell you this story I have to introduce myself a little bit.

My name is Aoife, I’m 21 and I’m a final year student in BIMM. I have an obsession with plants (all named after actresses who starred in Mamma Mia; Is this relevant? No. Important to my life? Yes.) I was a massive fan of vine back in the day, even garnering 1000 followers mostly made up of repressed emo kids. I love making earrings and necklaces at home from any random things I can find (shot glasses are surprisingly great earrings). I’m also into witchcraft and photography. What does all this information tell you? Oh yeah, she’s a massive lesbian. That is the best dating profile I could possibly make right there.

I initially came out as bisexual at the age of 16, just to my close friends at first and eventually my family. After coming to college however and getting quite a few hickeys (and wearing way too many flannel shirts for my liking), I realized I was a lesbian. I came out when I was 18 to my friends, and 19 to my family; they didn’t even act surprised this time to be honest.

They couldn’t exactly be surprised when I went from looking like the first to the second photo in the space of a year (also look at how amazing my friend Stephen looks!)

So, I was swept up in the queer community, going to as many LGBTQ soc events as humanly possible and trying to date girls (and failing because wow was I a terrible flirt, not much improvement there if I’m honest). I found the greatest friends possible who would let me sleep on their couch at a moment’s notice so I could go out to the George with them. When I tell you we lived in the George, it’s really not an exaggeration. We lived for it, would break our entire bodies dancing the entire night, have a cheeky Charlies or roll from Gay Spar at 3 am, and have little to no sleep for lectures in the morning.

Nights out in the George seem to be a blur now  It was truly an amazing time, but you must be asking, what does this have to do with TikTok lesbians Aoife?

Well since Miss Rona hit us, our last time in the George has become a distant memory. Days are spent at home craving that sense of chaos and community. I never intended on joining TikTok; you could ask anyone and they would tell you how much I would try to compare it to vine and how nothing could take its place. But finally, I was convinced to join.

When they make that joke of TikTok finding out you’re gay quicker than you ever did, they are not lying. I’ve never even seen a Charli D’Amelio video on there to this day as I’ve been transported into the depths of gay TikTok.

TikTok lesbians are honestly a different breed, going from traveling 5 hours to kiss their girlfriend and then suddenly doing a thirst trap a minute later. It was a lot. It’s still a lot.

While I searched for chaos and community, I found TikTok lesbians. Taking every trend and somehow turning it into the most sexual thing you’d ever seen. This sounds like a complaint; I assure you it’s not. But the real issue with them is the fact that they made me want to go on dates so terribly. But guess what bitch? You’re stuck at home.

I’d waste most of my days just scrolling through TikTok and being so unproductive, but I didn’t care! I was seeing cool lesbians thriving! We love it!

One thing I realized, however, was that they were all incredibly confident. While I’m always outspoken, I was never super confident. So, instead of letting that get me down, I decided to use my time in lockdown to help me gain more confidence. I used positive affirmations, staring into the mirror complimenting myself even if I felt like crap. But the main thing that helped me was photography. I was always into photography but decided that COVID payment money could easily let me impulse buy a nice camera, so I did just that. But of course, when it arrived, I had no one else around to take pictures of, so I took photos of myself. Self-portrait after self-portrait, I began to love how I looked, not because I’m absolutely brilliant with a camera and editing, but because I could see I was actually happy in them all. My friends always have my back and I’m now genuinely confident, although an argument could be made that it’s just pure narcissism because damn, I’m great.

So, if life ever gets you down, just remember: be a TikTok lesbian. Whether you’re straight or gay or whatever, it really doesn’t matter; being a TikTok lesbian is a state of mind. Be confident and proud of who you are, and be your own cheerleader because you bloody well deserve it.

P.S. If any of this resonates with you, then you can always check out the LGBTQ society on Instagram (tud_lgbtq)(I make all the beautiful graphics!); not even a global pandemic can put us back in the closet x 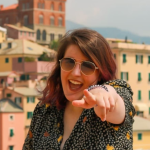