TOYGIRL are a 5 piece Alt band who met at BIMM. Since forming in 2018 they have experimented with their sound, cut their teeth with live shows and released 2 singles that have amassed approximately 250,000 streams on Spotify. I caught up with Cian, Fiachra, Ciaran and Aran to see what they are up to throughout lockdown.

Both of your singles ‘Reign’ and ‘Moonlight Velvet’ have amassed about 250,000 streams on Spotify. Where have been the most surprising places that your music has been streamed?

Cian- We’ve had streams in over 70 countries around the world which is pretty bonkers. Having people listening to our music in places like the UK, France, North America and some other European countries makes some sense as we have family and friends out there, but we’ve had streams in countries from Paraguay and Vietnam to Bolivia and Costa Rica which is both amazing and mind boggling. It’s mad to think that there’s people listening to our music in countries that we’ve never visited, and in some cases have never even heard of.

What was it like to record in the iconic Windmill lane studios and to work with Daniel Deburca and Cormac Butler?

Fiachra– We’re so lucky that we met Daniel, we all get on so well and he really gets what we’re about. Even though it’s usually about 6am when we leave the studio, we’re still sad to go because we have such a good time in there. It’s half making music and half messing like idiots. The studio is incredible as well, such a nice vibe which is what you need when you’re recording. Cormac Butler has been super easy to work with also and does a brilliant job mixing. We’re currently working with him on our next single.

Pre save our sophomore single 'Moonlight Velvet' now! Link in bio. We can't wait to share this one with you! ?@pizza_egg

You guys have been widely commended for your live performances, with Hot Press naming you the ‘Band of the Night’ at the Whelan’s One’s To Watch Festival. What has been your favourite venue that you have played in?

Ciaran– We’ve slowly been adding to our register of venue’s we’ve played. It’s honestly hard to pick a favorite. Playing in the Button Factory was obviously a great experience because it’s the biggest that we would have played, however The Sound House really resonates with me. This may be because of its sentimental value, as it’s where we played following the release of Moonlight Velvet. It was also a sold out show which was incredible. Having people coming from around the country and knowing our lyrics meant the world to us. However as I said, it’s hard to pick a favorite we’ve loved every venue we’ve played in.

What are the goals for your music after the Coronavirus?

Aran– The lockdown has forced all members of TOYGIRL to different ends of the country, making it difficult for us to work on music together. However, we have all been individually writing & working on ideas we hope to bring to rehearsals as soon as we can.

A big change for us & everyone else has been being unable to play live – which we all love, so we aim to return with more improvement on live performance, which we always strive for.

Finally, we can’t wait to get back into the studio to continue recording new material & ideas, with the goal to release again this year. 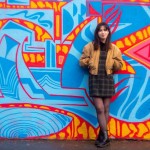