Me and my family have been quarantining for a month now and as everyone else we have become incessantly bored.

There are seven of us all cooped up in the house and with nothing to do but eat and drink (sensibly). Myself, my dad (Ciaran)  and brother (Tadhg)  all have been working fulltime from home. My cousin (Lily) is doing her leaving cert, sister (Sadhbh)  has been studying and Mam (Lee) and brother (Jamie) home schooling.

So obviously boredom and sibling fighting is as an all time high until the fateful day when My cousin and Sister had a great idea (maybe their first). that we should do family come dine with me.

And we all immediately began planning and picking our days.

To make things easier and to give her a break from cooking for seven people every day, my mam would not be taking part. Instead she would record our scores every evening and give her own. This also meant that we could have some unbiased guidance throughout the process.

There were a few things we had to bear in mind while cooking. Only half the oven worked, My sister is pescatarian, I don’t eat red meat, My older brother and Mam don’t eat pasta and Little brother is the pickiest eater you will ever meet.

We had to make two course and one of them had to be a main. If you’re an avid viewer of come dine with me like I am you might be aware that entertainment will get you extra points (most of the time). We also decided to include themes.

We began on Tuesday with Jamie and Ciaran their theme being Chinese.

The starter was a delicious chicken noodle soup, vegetarian for Sadhbh and prawn stirfry for main.

Between the courses Jamie took us into the sitting room and we were broken into teams of two to play 30 seconds. Our favourite board game after ludo.

Sadhbh cooked on Wednesday night and she made a chicken stirfry with your choice of noodles or rice.

For dessert she served a family favourite of baked cheesecake.

We individually got to decide what we wanted for our slices which was a lovely addition to the night.

Tadhgs theme was Italy, more specifically the things he ate on holidays in Rome that one time.

His starter was a cheesy garlic bread alongside a pizza base with just passata, basil and a sprinkle of parmesan on it. Sounds weird, tasted amazing! We were served our choice of Peroni or Prosecco and shloer for Sadhbh and Jamie.

Then we were moved into the sitting room for our entertainment portion. Tadhg turned on Spirited away a family favourite for us to enjoy and the returned to the kitchen and had delivered our pizzas.

I don’t believe Tadhg took into account that our oven only half worked or maybe didn’t know. We were served youngest to oldest and it wasn’t until after 8 when I got served my pizza. I was quite hangry by this point but the pizza was delicious and he did go to the effort of walking down to the Italian shop to buy 00 flour.

It was finally Friday and I was on my nerves!

My theme is party and I delivered invitations in the morning to establish the theme.

For main I served a cheese platter with assorted meats and roasted nuts, Prawn Pil Pil, homemade garlic bread with shredded tomato on top, lots of breads and a feta, pomegranate and spinach salad with lemony dressing and salad with tomato, cucumber, mixed leaves and balsamic dressing.

For drinks, Sadhbh and Jamie had lemonade and for the adults I served a fruity mojito with raspberries, strawberries and lemon slices.

And then for dessert I served an incredibly chocolaty homemade cake with raspberry’s and vanilla ice-cream.

The napkins matched the invitations given out earlier. At the end of the meal each guest was given a party bag matching with the theme.

I knew going into the evening that Jamie wouldn’t eat any of the food served. So I made him plain garlic bread and pesto pasta.

I know it looks like a kid made the cake I’m not very good at decorating!

Lilys theme was Mexican and she was at a disadvantage of not being in her own house. Lily has been staying with us due to her mam being front line staff.

Lily served cheese wrapped chicken for started and a spread of fish tacos for main. Bottles of sol and desperados were served with it and pear soda for the kids. She made homemade salsa and guac served with tortilla chips.

Lily really carried here theme through well as we ate outdoors in sombreros.

Her entertainments was the best of the week  easily, we played two games. The first was that we had to carry dried beans by sucking them up to the end of a straw and seeing how many we could transport in 30 seconds. The second was a piñata full of sweets.

The winner were announced later that night by my Nana on Facetime who was watching all of our score videos and interviews each night. The prize was €50 so we all wanted to win.

Myself and Sadhbh came joint first and I was delighted. But also sorry that the week had come to an end. We also had to find something else to talk about other then come dine with me.

I also took all of the videos and made it into a 16 minute long come dine with me special for our family which they all thoroughly enjoyed, especially Lily’s Mam! 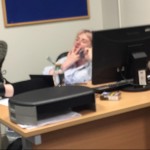